The benefits of rosehip oil and how to use it

The skincare ingredient of the moment, rosehip seed oil has gained huge popularity over the past few years, with celebs such as Kate Middleton and Miranda Kerr singing its praises. So what makes it such a powerful ingredient?


It wasn't until I returned home to the UK for a holiday that I noticed rosehips growing in the wild for the first time. I've seen photos thanks to working at Go Native, but I didn't quite appreciate how vibrant the fruit is in real life. I picked one and opened it up. I expected it to bleed a red-orange juice, as the oil we sell at Go Native is so pigmented - but the seeds inside are actually white, not unlike the inside of a capsicum. What else do you need to know about this hugely popular skincare ingredient? 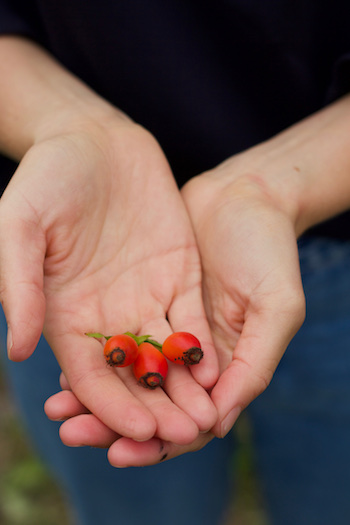 Whoever had the idea of cold pressing rosehip seeds was a genius. They will have discovered that rosehip oil is extremely rich in linoleic acid and linolenic acid - fatty acids that play a vital role in cell regeneration - which make the oil a potent moisturiser and anti-wrinkle treatment.


If you've ever suffered from acne you might be familiar with tretinoin - a derivative of vitamin A that's often prescribed orally in the form of isotretinoin, or topically as a retinol cream.

Rosehip seed oil naturally contains tretinoin, which is why it's often recommended for acne-prone skin, and as an anti-wrinkle treatment.

Tretinoin causes the cells of the skin to grow (divide) and die more rapidly, increasing the turnover of cells, and reducing the number of layers of cells in the skin. For people with acne, new cells replace the cells of existing spots, and the rapid turnover of cells prevents new pimples from forming. By a similar mechanism, tretinoin can reduce some wrinkles, areas of darkened skin (hyperpigmentation), and rough areas of skin, all of which occur in sun-damaged skin.

A word of caution for fellow acne-sufferers: while rosehip seed oil can help brighten and rebalance oil skin over time, and help to reduce acne scars, it's usually too rich to be applied directly to active acne.


It brightens and regenerates the skin


Rosehip seed oil has also been known to help dry, irritated and weathered skin, as well as for treating burns, scars and stretch marks.


The certified organic rosehip oil we stock is sourced from India, is cold pressed from the Rosa canina plant and is 100% pure.

How to use rosehip oil


The easiest way to incorporate rosehip seed oil into your skincare routine is simply by massaging a small amount on damp skin after cleansing, either first thing in the morning or before bed. It's wise to introduce the ingredient slowly as its cell regenerating effects can cause initial dryness. In my experience, I've found it's best not to use it alongside other retinol products for this reason. As mentioned above, do not apply directly onto active acne, as this can cause it to flare.

Rosehip oil is becoming popular with massage therapists for its skin healing properties, though it is typically in dilution with another oil such as almond oil which makes for a better massage oil (10% recommended). Rosehip oil is a long oil, but it's also a dry oil, which means it absorbs very quickly. It's best used as a "top" note in oil blending.

You can also include rosehip oil in all sorts of formulations as a carrier oil. Here's an easy, simple recipe for a light and moisturising rosehip face and/or body cream. Enjoy!

Method:
Put the water, rosehip oil and HE20 in a pot and heat until the HE20 is melted.
Blend until thick.
Add Geogard 221.
Blend to combine.
Spoon into pots.